Now recruiting! The Fort Howard Guard Fife and Drum Corps is seeking motivated new members, ages 10-22, to play fifes, and drums as a part of our Fort Howard Living History Program. Heritage Hill’s professional instructors will teach everything students need to learn during Saturday morning instruction periods. Musical experience or knowledge is not a requirement. 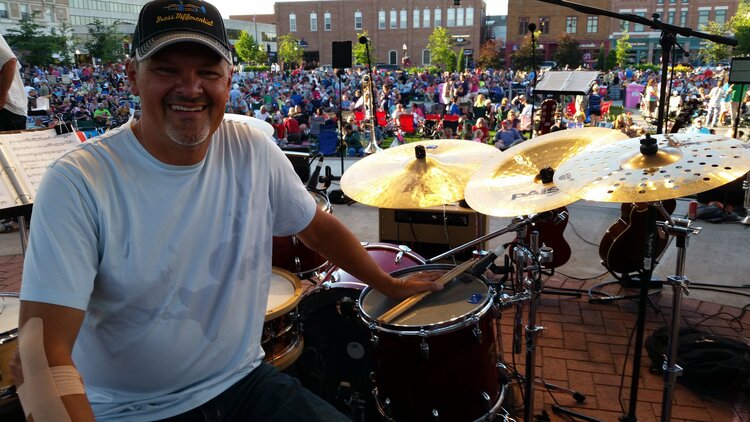 Steve Seitz (Drum Instructor) is a professional musician for over 40 years, who has toured nationally and abroad, including Europe, China, Canada, and the Caribbean. He has been a drum/percussion instructor in the Green Bay/Fox Valley area since 1986. Steve has studies with some of the country’s most gifted drummers and percussionists including Ryan Korb, Graham Lear, Tony Rongo, and Casey Scheurell. He also currently plays with Brass Differential, Daddy D Productions and is the house use drummer for Doctors in Recital for past 10 years.

“Studying music is one of the most important ingredients of a well-rounded education, contributing to the development of responsibility, mental discipline, teamwork and self-esteem. It also provides students with an outlet for creativity and expression.” – Steve Seitz

Rose Van Himbergen (Fife Instructor) received her Bachelor of Fine Arts in flute performance and business from the University of Wisconsin-Milwaukee. She has been playing flute and piccolo with the Civic Symphony of Green Bay for over 12 years and enjoys chamber music and performing with other ensembles whenever possible. She is an avid volunteer and currently sits on the boards of the Association of Wisconsin Symphony Orchestras and the CSGB and also volunteers for other nonprofit groups. Rose works as a procurement manager at Kimberly Clark and enjoys the balance between business and pursuing her passion for music. Rose lives in Green Bay with her husband and two children and is currently pursuing her MBA at UW-Oshkosh. Fifes and drums were an indispensable part of the daily military experience during most of the 19th century. Military field music served as a routine communication system that ordered the soldiers’ day and conveyed critical signals during the din of battle. A fife and drum could easily be heard from hundreds of yards away. Fifes and Drums also functioned as regimental bands and provided morale-boosting musical accompaniment while on the march. During the 1830s, each company had one fifer and one drummer. On average, drummers and fifers tended to be younger soldiers, but musicians of all ages were encountered

While in garrison and camp, fifes and drums provided the daily “duty calls” that regulated the soldiers’ routine. The day started with Reveille and a tune called “Three Camps” roused the troops out of their beds. Variously called “Roast Beef’ or “Peas on a Trencher” the signal for breakfast followed Reveille. In between breakfast and the noon meal, a number of drum signals served to direct the Officers and men. “Tattoo” signaled the end of the day.

During battle, or while drilling, the fifes and drums played a critical role in conveying everything from the rate of speed for marching to the firing of muskets. The shrill sound of the fifes combined with the resonant beat of the rope-tension drums filled the sounds of Fort Howard on a daily basis.

In 2023, the Heritage Hill State Historical Park will resurrect the sounds of the fifes and drums at old Fort Howard with the establishment of a fife and drum corps. The fife and drum corps will provide seasonal interpretation at Heritage Hill. This is defined as the period between May and November, with some special event performance during the Holiday season. The frequency is not yet determined but it is known that individual elements of the corps will be employed on a daily basis at the Fort. Large group performances may be performed on a weekly basis. Uniforms and equipment, as well as the repertoire and practice methods will painstakingly conform to period-correct standards.

The music repertoire will consist of tunes that were commonly played during the 1830s, as well as the duty signals as outlined in the 1835 edition of The School of the Soldier. These will be researched from primary sources and commonly available secondary sources such as the Company of Fifers and Drummers publications.